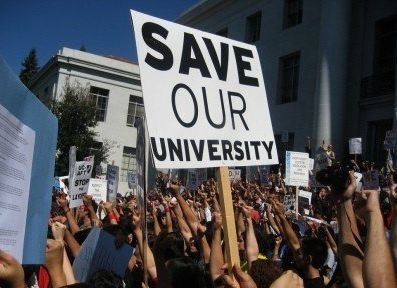 Some advice one of my English professors gave my class this semester:

This fall, we’re seeing a trend of students at some of the greatest schools in the country not heeding that advice. Most recently, students at Brown University shouted New York City Police Commissioner Raymond Kelly off stage at a lecture he was supposed to deliver on policing. Weeks ago, Tufts University students took similar action against a lecture delivered by Supreme Court Justice Antonin Scalia, although the lecture was not cancelled.

The Tufts liberal inside of me initially wants to commend these efforts. Both of these men have said and done things that make my stomach churn, and I think their conservative policies are doing quite a lot to prevent this country from progressing. I, personally, would not choose either of them as idols of American justice and leadership.

I would, however, most certainly invite them to come and speak at my university, place of work, home, etc.

The only test of whether or not an argument or method of thinking is strong is if it can stand up to criticism from the other side of the table. If your argument can logically dominate its counter-argument, then chances are it is valid and strong.

How are you ever going to test your beliefs if you refuse to even listen to the opposition?

Whether you believe them justified or not, these demonstrations attempted to silence a voice because it was not in alignment with the demonstrating group’s opinion. In Brown’s case, any opportunity for critical discourse on the Police Commissioner’s lecture was denied by preventing him from speaking. Accounts from the lecture at Tufts claim that Judge Scalia was scuttled off stage before students could respond to his lecture. Both cases are dangerous because they allow ideologies to reign unchecked. A quick look in the history books will confirm that this is never a good thing.

Rather than preventing or attempting to prevent these men from speaking, each campus should have rolled out the red carpet for them. Should have let them take the stage and say what they had to say without interruption.

When the floor opened up for discussion, (and if it didn’t, it most definitely should have) the audience should have challenged and pressed every point made to their heart’s content. Should have, essentially, crystallized all those powerful emotions that stirred the desire to protest into well-articulated criticism, and observed how each man handled it. Had they faltered, prevaricated, or devolved into illogic, than students should’ve needed no more proof that their own beliefs were indeed strong and valid.

Protesting, if you think about it at its most basic level is a relatively simple science: you group up, make signs, and yell very loudly. Protesting is important in that it’s the option to turn to when critical discourse is stifled. When somebody refuses to hear your take on the issue (sound familiar?) despite your best efforts, then it’s time to make the picket signs.

But protesting the opportunity to hear and engage critically with an ideology is damaging for both parties involved. Unfortunately, it’s something that can tend to happen quite a bit on a small liberal arts campus. It’s excellent that so many of us have similar convictions, but when those convictions are treated like dogma, we become just as problematic as those we protest.

Rather than demonizing conservative ideologies and groups that come into contact with or are a part of our campuses, we should be thanking them for existing. The critical discourse they spark causes us to reexamine our own beliefs, create stronger arguments, and formulate better solutions. Even if some of the things they say initially make us want to tear our hair out from its ends.

The academy has always been a place for learning through critical engagement and discussion. How much are you actually learning if you can go through an entire day and not have a single one of your beliefs challenged?

This article was originally published on The Huffington Post, and can be read here: http://www.huffingtonpost.com/michael-restiano/ray-kelly-brown-protest_b_4179306.html